To date, Hanoi still emanates with remnants of the French rule through its centuries old gothic churches, French colonial buildings and opera houses. But it also exudes with traditional Vietnamese flair, making it one of the most interesting cities in the country, a blend of both Asian and European influence. As it is the capital of the country, most airlines from several countries fly to Hanoi directly, thus, it is possibly one of the first cities you’ll visit when traveling to Vietnam. While Hanoi is often just a jumping-off point to other popular destinations in Northern Vietnam like Halong Bay, Sapa and Ninh Binh, it has its own attraction and character to flaunt. Hopefully, this Hanoi Travel Guide blog will help you in planning your trip here soon. BEST TIME TO VISIT HANOI:  Although Vietnam has tropical climate: hot and rainy, Hanoi city experiences 4 seasons: Winter (November to January), spring (February to April), summer (May to August), and autumn (September to October).  I visited during winter, around November, and it was pretty cloudy, cold and foggy. It was also raining a lot that time hence the dark, moody photos on this blog.  I had to change my itinerary; detoured to Southern Vietnam instead of visiting Sapa because of the rain.  Spring would be an ideal month to visit due to the mild weather.

VIETNAM VISA:   No visa required for Philippine Passport holders for up to 21 days.

LANGUANGE IN HANOI:  Vietnamese is the local language. However, stuff at hotels, tourist establishments, vendors, and drivers can speak English.

MONEY EXCHANGE IN HANOI:  If you need to exchange money, you can do so at the bank or at gold and jewelry shops.  Bring USD instead of peso as it has a better rate.  But since the best rates are the banks’ rate, you can save a few bucks by withdrawing from ATMs scattered around the city.

IMPORTANT:  Any damaged or dirty banknotes will be charged an additional 2% of the note’s face value, so best to bring new notes.

IMPORTANT:  Always count your change and make sure you are handing the right notes when paying because the currency in Vietnam can be confusing; there’s a lot of zeros and the color of the banknotes are almost the same. You will lose a lot of money if you pay with the wrong notes, some vendors in Vietnam won’t correct you if you make a mistake.  Sadly, shortchanging tourists is quite common in touristy areas in Hoi An. In Ho Chi Minh, I was eating when a tourist hurriedly went back to the restaurant and told the staff that he made a mistake when he paid for his food the previous night. He just realized it when he counted his money the next morning. It happened to me once too, but in my case, the vendor shortchanged me. I insisted the change was wrong, and pointed to her the correct notes that I gave her. His husband ended up giving me the correct change.

HANOI ELECTRICITY:   Hanoi uses type A, C and D power sockets like the rest of Vietnam. The standard voltage is 110 V/220 V. Make sure you have a power plug adapter when traveling to Vietnam.

HANOI WI-FI/INTERNET:  Getting connected online is important when traveling around Hanoi and the rest of Vietnam.  While locals in touristy areas, hotels, shops and restaurants speak English, you might experience language barrier in off-the-beaten destinations.

I prefer renting a pocket Wi-Fi as it is easier to set up than sim card.  If you wish to rent one, you can do so through the link below and it will be delivered to your hotel in Hanoi, Hoi An, Da Nang or Ho Chi Minh City. The pocket Wi-Fi can connect up to 8 devices. 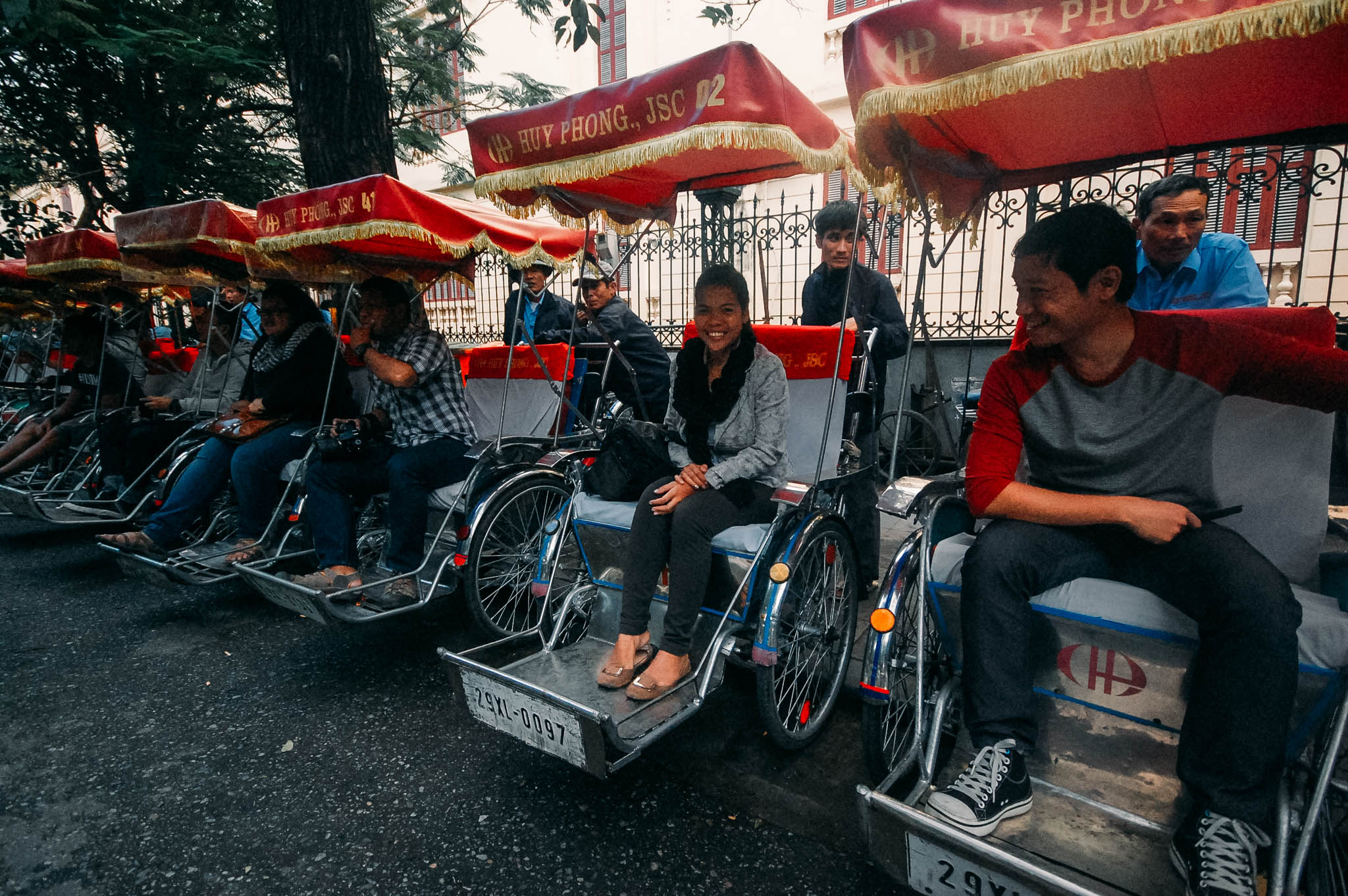 Cyclo is another way to get around and tour Vietnam, but it only covers limited distance and places.  But it sure is worth a try.  Our Hanoi private tour includes a cyclo tour with it.  If you want to try this, you can approach a cyclo driver and negotiate the price (always agree with the price first before riding as some drivers are known to overcharge tourists!), or book for a Hanoi Tour with cyclo tour below.

For first-timers in Hanoi, here’s a list of the famous tourist attractions to help you pick the ones that you want to visit and include in your itinerary.  They are typically part of the Hanoi group tours I mentioned above.

Hanoi’s Old Quarter has been thriving since imperial era, steep in history and culture and bustling with thriving hawkers, shops and hotels located in French-colonial buildings. It is also sprinkled with pagodas and temples. This atmospheric quarter is the typical base of first-time tourists in Hanoi. Back in the days, Hanoi Old Quarter used to be known for specific trades for each areas where merchants gather to sell their products.

While you are here, try the Vietnamese food being sold by street hawkers wearing traditional Vietnamese hats like pho, banh mi, spring rolls and sip a glass of a strong Vietnamese ca phe da (ice coffee). Ta Hien Street in Hanoi Old Quarter is dubbed as the Beer Street and it’s not all about beer, it’s also a good place to try local food while eating it on street sides with small plastic red chairs used as both seat and table.

Hanoi’s French Quarter sits on the southern edge of Hoan Kiem Lake where you can find many of Hanoi’s government buildings, embassies, luxury hotels and posh neighborhood. For those who love to shop for luxury brands, check out Trang Tien Plaza, a lively shopping area here.

Probably my favorite part of Hanoi is the Hoan Kiem Lake, which is standing at the heart of it, dividing the Hanoi French Quarter and the Old Quarter.  It’s a great place to hang out and take a respite from the pulsating city and buzzing motorbikes in the Old Quarter.  In the middle of the lake you can see the Turtle Pagoda dedicated to the gigantic tortoise living on the lake. Early in the morning, you can catch locals practicing Tai Chi, walking or cycling around the lake.

The Ngoc Son Temple can be accessed via the red wooden bridge at the Hoan Kiem Lake also known as the Temple of the Jade Mountain.  This 18th century temple is dedicated to General Tran Hung Dao who defeated the Mongols during the Yuan Dynasty in the 13th-century. Temple is open from 8:00 AM – 5:00 PM and entrance fee is VND 30,000/PHP 68/USD 1.32/EURO 1/SGD 2/MYR 5.

And while you are at Hoan Kiem Lake, you might want to buy a To He, a traditional toy figurine, usually in the form of animals, characters or flowers that is popular in Vietnam.  It’s made of glutinous rice powder, typically made by local artisans from the countryside.